On the second season of Bravo’s Top Design reality interior design competition show, Wisit, an opera singer who’d studied at Parson’s, was one of my early favorites. Sadly, he didn’t hold up well under pressure – his style was self-described as “modern classic elegance” and when one of your clients is Project Runway’s Jeffrey Obnoxious, it’s just not going to work out. Although he should have been out then, the final blow was episode 6, a green office challenge. I don’t remember the exact wording, but basically, he said his green attempt amounted to not buying more than he needed for the challenge. I joined the judges in scorning him for not really understanding “green”, but today I’ve been thinking about how that would be a really good first step.

When I started working at the craft store in November, I hoped I’d find some new ideas to use all the craft supplies and such that I already own. Instead, I’ve bought even more. My yarn stash is quite literally exploding out of its drawers, and my papercrafting supplies no longer even have drawers to explode out of. It’s ridiculous. I mean, I buy things with the intention to use them – I won’t let myself buy anything without a specific project in mind – but that doesn’t guarantee that that project will ever get done or those supplies will ever get used. I’m not a craftaholic, I’m a craft supplies-aholic.

Back to the main point… in all honestly, if more people took that first simple step of not buying more than they needed, well, it would be a great green start. Things like gluing plastic bottles to your light fixtures and stapling the old carpet padding to your walls can come later…

And now, just so you don’t get bored – pictures! I sold my third item! Another set of the mini-notecards, this time with some very vibrant colors and a cute swallow! 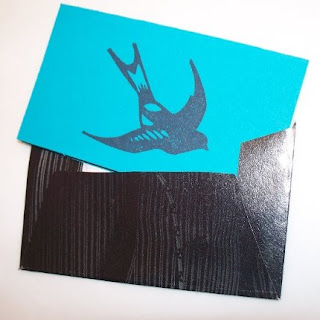 I really need to get back on etsy, taking down my Christmas cards and listing new stuff – I’ve made more notecards and some gift tags. Here’s a preview, made from scrapbooking and knitting scraps 🙂 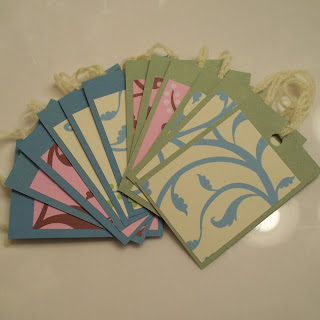 Surely someone out there offers scrapbooking services, yes? I mean – the customer sends their photos and nostalgia to the scrapbooker, who provides the supplies and puts them together into scrapbooks. This idea interests me, since I’m sure there are people out there who want a scrapbook made but feel like they don’t have the time or talent to do so, but it also worries me because there seems like there would be a lot of risk involved in entrusting your photos and materials to someone else (not to mention, to the postal system!) I’m curious if anyone has heard of services like this being offered? I guess it’s really just a curiosity question, since I intend to make my own but am about 4 books behind right now! I have no shortage of scrapbook corners or double-sided tape though, yay for clearance bins and Michael’s weekly 40% off coupons!

Perhaps this was really just an excuse to post scans from my craft portfolio of 3 of my favorite scrapbook pages. I do love Robin Hood… 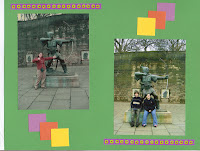 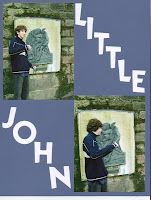 Here’s hoping it will be better than 2008 has been! I haven’t made New Year’s resolutions in a long time, since I never managed to keep them. This year though, I’m going to make some craft-related resolutions.

1- I’m going to be productive every day. This can be working on a craft or listing something on etsy. Reading other blogs or browsing other etsy shops does NOT count, since that’s all I manage to do anyways! It can be as simple as knitting one row on a scarf, which really shouldn’t be a problem since I’ve usually got at least 3 scarves in progress.

2- I’m going to work through my craft stash as much as possible. Any new project, unless it’s a specific custom request from someone, must include something from my stash. Ideally, I’d like to be able to fit all of my yarn in the set of drawers that’s meant to be my yarn stash. And I’d like all my beads to fit into my bead box again, lol. Seriously, it’s at least 12x12x12, so it holds a LOT of beads as is.

Not craft-related, I WILL find a full-time job. Although the craft store is promoting me as of Monday to a temporary Front End Supervisor, so at least I’ll make slightly more at that job 🙂

For a different take on the New Year, I’ve just been reading Lucky Girl Trading Co’s blog post about making a New Year “theme” rather than a resolution. She’s got a contest running where you choose a theme for your year, and then leave a comment about which item in her shop will best fit that theme and help you work towards it for the New Year. I chose “simple/simplify” and I think my crafty resolutions above fit into that. I found this lovely dichronic glass pendant in her shop that strikes me as simple but elegant. You should check out her shop and also the details about the contest, as you could win a $15 store credit and I’m SURE you could find something to spend it on (or hey, you could pass it my way and I could spend it for you :P)

HauteAndi is also sponsoring a contest via the shop’s blog, Hauteness. The shop is full of adorable hats made from upcycled materials. This is all coming from someone who isn’t a big fan of hats, and really doesn’t like wearing them, and yet I felt very reluctant to advertise this contest, because I WANT THIS HAT!! Still, I thought the shop deserved your attention! 😉

Ok, I’m going to stop rambling and roaming etsy-related blogs, and go be productive because hey, it’s my resolution!

Sometimes things were just meant to be 🙂 My crafting is often about happy accidents, so I think this story is pretty fitting! Not too long ago, I stumbled across an etsyian and fellow Richmonder who was decorating bobby pins with vintage buttons, jewelry, etc, such as these by Historically Inspired Designs. I was reminded of some old clip-on earrings that had fallen into my possession when my grandmother passed away (I was 10 at the time, and already quite a hoarder, so I was the only one interested in some grimy old clip-ons with a couple of jewels missing). I’d taken off some of the fake rhinestones for other projects, but had held onto the earrings themselves in the hopes that I might some day make use of them. So after seeing Historically Inspired Designs’s bobby pins, I thought I’d try my hand at my own.

I’m something of an immediate gratification crafter- if I don’t start something the minute I think of it, I’ll never do it, so I usually have to work with the materials I have on hand (which is part of why I have such a HUGE craft stash). So, I dug out Grandmother’s earrings, opened the epoxy glue I had recently purchased for marble magnets (which still haven’t happened, although that E-600 glue is amazing stuff which has come in handy several times), and raided a couple of rooms for different types of bobby pins – eventually opting for a pair of my mom’s goldtone ones to coordinate with the earrings (the bobby pins themselves are vintage as well).

After ripping off the clip-on backs using some heavy-duty wire cutters, I glued them to the bobby pins and propped them against some stacked newspaper and the like. The gluing didn’t go very smoothly as there’s very little of a bobby to glue to anything, so I started to wonder if there were bobby pins specifically made for such a thing (I’ve just discovered that there are, but I’ll get to that in a minute). Still, I don’t think they turned out too shabby (I think you can click the photos below for larger versions). 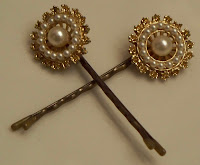 Some things I wish I’d done differently – taken photos of the process, I really wanted to get into the habit of doing that. Found the correct materials before starting the project (that never happens with me – wishful thinking!). Left the rhinestones in the earrings long ago (although I think that several of them were missing already, so I guess it really doesn’t matter that much.

Now to the second part of the happy accident – I’ve worn them several times, and really love them, but had kind of forgotten about sharing them here. I’ve wished I could make some more, as they are simple but beautiful, but I know it wouldn’t work very well with regular bobby pins. So, tonight while roaming craftster.org I wandered into a section I’ve never been in before – “Opportunities for crafters” – where I spotted a post directing me to a bobby pin challenge, with details here. There’s a prize of some findings, including some silver bobby pins with plates on them specifically for decorating! It looks like no one has entered yet, even though the deadline is tonight, so if I can get some good photos of grandmother’s earrings I might have a chance, but at least, now I know that decorating pins exist and where I can find them 😀 Score!

You can see photos of more decorated pins on the flickr group for this and presumably future challenges as well. If you aren’t ready to tackle this project yourself and would rather buy some, be sure to check out Historically Inspired Designs on etsy. I’m curious to see if the contest sponsor lists any on etsy as well, but that shop is currently in vacation mode, so I’ll have to wait and see!